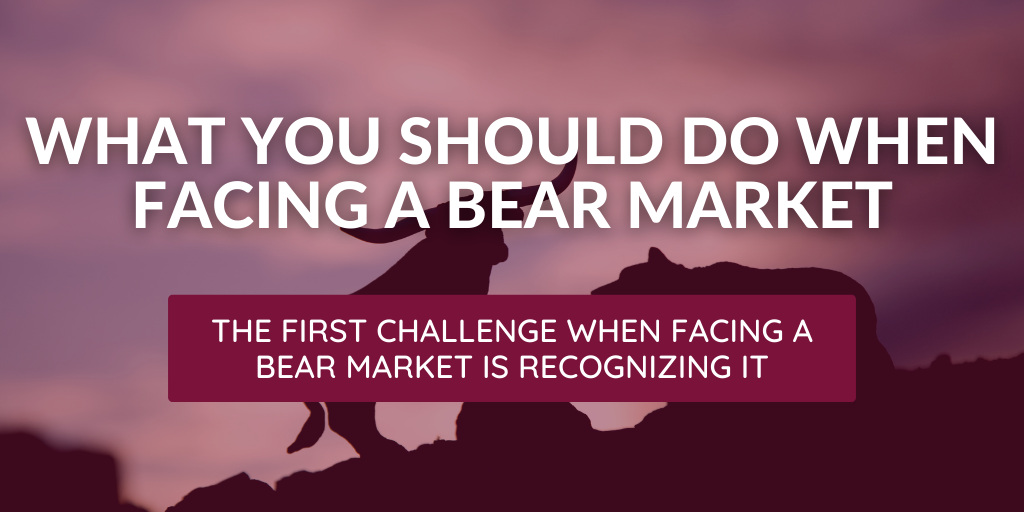 What You Should Do When Facing a Bear Market

The first challenge when facing a bear market is recognizing it

Every investor knows that his or her portfolio is at least partially at the mercy of the market itself, with overall market conditions playing a huge role in general gains and losses. Most investors have probably heard the terms "bull market" and "bear market" used to describe these conditions, but not all of them truly understand the difference between the two, or what to do when a bear market hits.

Investors at any level should take note of these distinctions to make good investments and properly manage a portfolio as the market shifts over time.

The difference between the two types of markets is quite simple:

It takes little examination to conclude that a bull market tends to be fairly comfortable and prosperous for investors, while a bear market can leave investors feeling a bit anxious. What should an investor do when faced with a declining market?

What to Do When Facing a Bear

The first challenge when facing a bear market is recognizing it. Because short-term trends can't predict whether the overall market will continue to rise or fall, it can take a sharp eye and a keen investor's instinct to be truly confident in one's moves when looking at a short period of time (less than a month, for example).

Fortunately, most economists agree that this determination can be made by a percent change in multiple indexes. If the change is at least 20% in either direction (rising or falling), the market can more safely be declared bear or bull. Depending on how long an investor is willing to ride out the trend before making gut decisions, selling and buying comes at the risk of the market trending the opposite direction in the long term. The outcomes of such decisions sometimes feel arbitrary, making the old idiom of "playing the stock market" all too accurate.

Bear markets aren't caused by any one thing. Since the 1950s, there have been 10 bear markets brought on by a variety of issues. Some bear markets follow major political occurrences (formation of alliances, military actions, changes in federal financial regulations, etc.). Others are brought on by a combination of economic forces, rapidly rising stock prices and/or large-scale changes in investors' decisions as a result (the dot-com and housing bubble bursts, for example).

Perhaps most interestingly, a bear market may even be brought on by the social consensus of investors themselves due to something called "investor psychology." For example, some investors may be compelled to sell when others are selling and buy when others are buying. By jumping on the proverbial bandwagon and following others' lead, investors can create a swirl of activity that drastically affects the market, even if things had actually been going rather smoothly.

Some small consolation to all this is that bear markets are usually shorter, lasting around 15-18 months – a mere fraction of the average duration of a bull market. Despite their shorter length, however, average losses are typically around 40%, making the task of surviving even a particularly brief bear market seem like an investor's nightmare. The question is: should the average investor remain invested when a bear market rears its ugly head?

If you've got the staying power, sticking it out in a down market can be well worth it. If you are investing with a long time horizon, especially, you can afford to be a bit more aggressive with your moves, as it allows more time to make up for short-term losses. If you lose an average of 40% over the course of 15-18 months but have 10-15 years left until your target of retirement, you have a significant amount of time to potentially make up those losses and continue to gain. Of course, 40% loss is relative to the size of your investments and the strength of your portfolio; losing 40% of a relatively small portfolio can seem much more damaging than losing 40% of a rather large one.

It's important to briefly note here the relationship and distinction between a bear market and a recession. While bear markets are sometimes accompanied by a recession, a recession is an economic trait, classified by at least two consecutive quarters of negative growth in the Gross Domestic Product (GDP). A bear market, on the other hand, is a market trait, defined by a 20% decline from a recent high. Although the two measurements are closely related, one is a measure of the country's overall economic stability while the other is a measure of trends in stock prices.

Whether you'll be able to wait out the bear market and rebuild your assets to your satisfaction depends upon what seems like a deluge of factors: the duration of the downward trend, the future of the market, the strength of your investments and the choices you make going forward.

With careful planning, safe, long-term investments and a cool head, however, these obstacles can be surmounted. Ultimately, you as the investor will need to examine your own situation and investments to make that call. A financial professional can help.

The opinions voiced in this material are for general information only and are not intended to provide specific advice or recommendations for any individual.
Investing involves risks including possible loss of principal. No investment strategy or risk management technique can guarantee return or eliminate risk in all market environments.
Gross Domestic Product (GDP) is the monetary value of all the finished goods and services produced within a country’s borders in a specific time period, though GDP is usually calculated on an annual basis. It includes all of private and public consumption, government outlays, investments and exports less imports that occur within a defined territory.